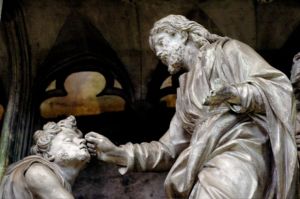 “As he went along, he saw a man blind from birth. His disciples asked him, “Rabbi, who sinned, this man or his parents, that he was born blind?” “Neither this man nor his parents sinned…this happened so that the work of God might be displayed in his life.” (John 9:1-3, NIV)

Jesus and His disciples met a blind man near the temple, probably droning the beggar’s plea: “O tenderhearted, by me gain merit.” The Pharisees viewed him with contempt: “You were steeped in sin at birth!” (v. 34). The Rabbis traced physical disease to moral causes: “…the sick is not healed, till all his sins are forgiven.” Jews blind from birth could not recite Shema, the centerpiece of Jewish faith: “Hear, O Israel: The LORD our God is one. Love the LORD your God with all your heart …” (Deut. 6:4) Some tried magical cures, tying a cord to themselves and a dog. After the dog ate meat on a dunghill from seven houses, Rabbis untied the cord, intoning: “Let the blindness…pierce the eyeballs of the dog!” They said blindness continued into Sheol: “…every man would appear after death exactly as he had been in life, whether blind, dumb, or halting…afterwards God would heal.”

Imagine this man’s burdens! He stumbled along the stone streets of Jerusalem, bumped into walls, fell, and constantly needed help, even going to the toilet. He endured jeers and pranks from cruel children. He received little respect and was not treated with dignity. He begged because his parents were poor—perhaps from caring for him! He could not recite Shema. Unable to see impurities, he could not enter the temple. Possibly he tried superstitious cures. Even after death he anticipated further blindness. The idea that God punished him for his or his parents’ sin led to guilt, resentment against his parents or anger toward God. Then Jesus’ words came like a refreshing breeze.

“Neither this man nor his parents sinned… this happened so that the work of God might be displayed in his life.” “Not my fault? Nor my parents’?” Guilt, resentment and despair dissipated like fog in the morning sun. “My blindness, an opportunity for God’s work?”