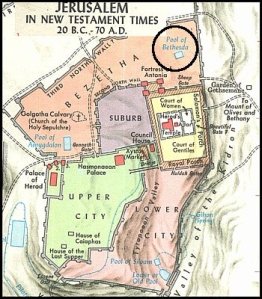 This Sunday we will be looking at John 5:1-15 and asking the question: Do we have the courage to pursue emotional health? My intention is to lift four components of what it means to pursue emotional health from the passage. There are, however, a lot of very cool insights that we probably won’t be able to develop much on Sunday; so I thought I’d share a few here (my thoughts have been informed by commentary at BibleGateway.com)…

The picture above is a map of Jerusalem during the time of Christ. The Pool of Bethesda is shown in the circle (the NE corner of the city). Notice from the passage (v. 1) that the pool is near the “Sheep Gate.” This probably means the pool was used to bathe the sheep before they were taken to the temple. Yuk!! The picture below is a replica of what the pool, which was spring-fed, looked like. Bethesda comes from two Hebrew words — beth and hesda, and means “house of grace.” Notice the five porches supported by columns (or what the NIV Bible calls a colonnade; the NAS uses the word porticoes). This area has been excavated in Jerusalem – the pool was actually two large trapezoid-shaped pools with a 21 foot wide space between them. The whole structure was enclosed by porches on each side with a fifth porch over the area dividing the two pools. Further down is a picture of what the Pool of Bethesda looks like today. Finally, by way of introduction, many commentators refer to the man who was healed as a Judas figure. The thinking behind it is that he apparently “sold-out” Jesus to the religious leaders who were making a case to put Jesus to death (v. 15). 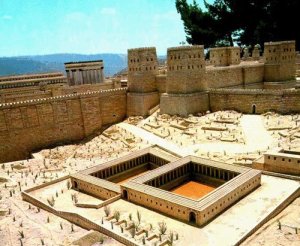 With that said, this passage can be divided into three scenes:

Scene I
Jesus is back in Jerusalem for an unspecified feast. He visits the pool where people with various illnesses gathered to seek healing. Jesus takes the initiative, as he did with the woman of Samaria (see previous chapter), and approaches a man lying by this pool who had been ill for 38 years. We are not told exactly what was wrong with him. The NIV translates the general term astheneia (weakness or disease) as invalid. We are not told how long the man had been coming to this pool, but he had been there long enough to miss the stirring of the water a number of times.

The man finds himself in a situation of utter hopelessness and futility. But while the man cannot get to the pool, Jesus gets to him. The man is met by the One who is the constant source, not just of healing, but of life itself.

Jesus initiates the contact by asking if he wants to get well (5:6). John’s gospel stresses both divine sovereignty and human responsibility, and here we see both Jesus’ sovereign approach to this man and the importance of the man’s own desire. What would we say to Jesus if he asked us if we wanted to be healed of our own illnesses – physical, spiritual, or emotional? Do we want to be rid of our addictions and other sins? A few minutes of authentic thought on this question could lead us to fresh depths of heartfelt repentance. It seems like a silly question – of course he would want to be healed. But perhaps the man has grown accustomed to his disability – what I call “becoming secure in our insecurities.” Perhaps he would prefer the known pain to the terror of the unknown, with all its new responsibilities?? It’s important to note that God finds each of us as helpless as this man. The good news is that he desires to grant each of us life – with this caveat: God cares more about our character than our comfort.

This man has no idea who Jesus is. Instead of giving him a hand into the pool Jesus gives him immediate and complete healing. To be able to walk and carry his mat after thirty-eight years meant he received not just healing from his illness, but also strength and muscle tone. 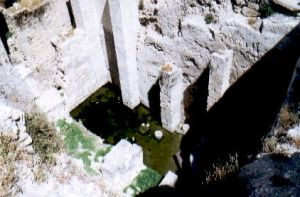 Scene II
After describing this healing John mentions this occurred on a sabbath (v. 9). The religious leaders reproach the man for carrying his mat on the sabbath (v. 10). The Old Testament does not prohibit this activity, but rabbinic interpretation of the command not to work on the sabbath did prohibit it (m. shabbat 7:2; cf.). Since Jesus explicitly commanded the man to carry his mat we have a conflict between interpretations of God’s will. The religious opponents believe the man is sinning as he obeys Jesus’ command. The opponents ask, “Who is this fellow who told you to pick it up and walk?” (5:12). It turns out that the man at the pool does not himself know who Jesus is (5:13). Jesus keeps a low profile (I wonder why??).

Scene III
Jesus does not leave him in this ignorance but, in this final scene (5:14-15), he finds him in the temple. Again Jesus is taking the initiative. Jesus now speaks to him in a seemingly abrupt manner: “See, you are well again. Stop sinning or something worse may happen to you” (v. 14). The man had earlier obeyed Jesus’ command, but it had gotten him into trouble with the religious leaders. Now he disobeys (at least from some commentator’s points of view) Jesus’ directive to stop sinning, as he seemingly betrays Jesus to the religious leaders. He seems to be caught between Jesus and religion, and he seemingly does not choose wisely. He now knows the name of Jesus, but he continues to be ignorant of Jesus’ true identity (sound familiar?).

There is a connection clearly drawn between this man’s sin and his illness (5:14), whereas a later passage (see John 9:3) seems to suggest that not every illness is directly linked with particular sins. This informs us that it would be unwise to view every illness as connected to sin. Having said that, it would also be unwise to reject the idea that there is never such a connection! In practical terms it seems wise to take any illness (or crisis) as an occasion for a sincere examination of conscience. And certainly, just because there are no crises in a person’s life does not mean there is no sin to turn from (cf. Lk 13:1-5).

Asking this man to stop sinning seems like an impossible request, but it is actually part of the good news, implying that he has been forgiven (cf. Jn 8:11; Mt 9:1-8; Mk 2:1-12; Lk 5:17-26). Here we see Jesus taking away sins in the world — forgiving even those who will go on to betray him. There is a theme in this gospel (and 1 John) that Christ-followers have been freed from the power of sin. Jesus is challenging this man to a new life, the life from above (John 3:3, 5). The barest glimmer of desire on this man’s part brought Jesus’ healing to his life, and now he is invited to move far beyond his weakness — both physically and spiritually.

Jesus is healing a person who (apparently) is not even an active seeker of truth, and in doing so he reveals the graciousness of God. Here we have God’s love revealed, which embraces even one who ends up betraying him. God is good.