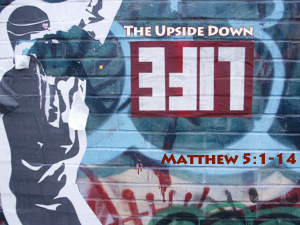 Technically we’re still in our Upside Down Life series.  This is week #9 of the series and week #C looking at Matt 5:6: “Blessed are those who hunger and thirst for righteousness, for they shall be satisfied.”  If you missed those the notes can be found below.

Last week I began to zero-in on the word righteousness in Matt 5:6 and, first of all, we noted that it is a hunger and thirst for God’s righteousness – not our own.

We also said that God’s righteousness is part of a larger theological concept (or construct) called the Doctrine of Justification.

The Doctrine of Justification can be compared to a two-sided coin.

Here’s the BIG IDEA for today: A lot of church-goers have not understood both sides of the “justification coin.”  We tend to think of justification mainly in terms of God’s forgiveness.[1] Today I’d like to dig a little deeper into the “imputed righteousness” side of the justification coin found in Roms 3.

We will be looking at Roms 3:21-28.  This material this been informed largely by the teaching of Tim Keller and Wayne Grudum.

The section of Scripture that really unpacks the concepts of Free Justification and Imputed righteousness are found in Roms 3:21-5:21.  We will be looking at the first eight verses of that section.

Roms 3:21-28 (NIV) (It will be helpful for you to know that the Greek words for righteousness and justified come from the same root word in this passage…

21 But now apart [or distinct] from the law the righteousness of God has been made known, to which the Law and the Prophets testify [one single story arc in the Bible – the Gospel]. 22 This righteousness is [1] given through faith in Jesus Christ [2 – given] to all who believe[2] [not just head, but head & heart[3]]. There is no difference between Jew and Gentile, 23 for all have sinned and fall short of the glory of God, 24 and all are justified [1] freely [2] by his grace [3] through the redemption that came by Christ Jesus [i.e., His finished work[4]]. 25 [In v.25 Paul is saying the same thing in a little different way] God presented Christ as a sacrifice of atonement [to make amends or to satisfy], [how did Jesus atone?] through the shedding of his blood —to be received by faith. He did this to demonstrate his righteousness, [1] because in his forbearance he had left the sins committed beforehand unpunished — 26 he did it to demonstrate his righteousness [2] at the present time, so as to be just and the one who justifies those who have faith in Jesus. 27 Where, then, is boasting [As if we were able to accomplish any measure of righteousness or justification]? It is [boasting is] excluded. Because of what law? The law that requires works? No, because of the law that requires faith. 28 For we maintain that a person is justified by faith apart from the works of the law. [Freely, by grace alone, through faith alone, in the blood of Jesus alone.]

1. Why do we need free justification?

Every human soul on the planet is seeking justification…

Some other words we might use to describe this “hunger and thirst,” this “longing” is that we are all seeking to “justify our existence.”

We all want to know that our life counts  — we all long to feel worthy, accepted, and validated.

Justification is an integral piece of our (humankind’s) search for meaning.

Augustine said it well in a famous prayer: “God, You have made us for Yourself…and our hearts are restless until they find their rest in You.”[5]

Roms 2:15 [Gentiles] “They show that the requirements of the law are written on their hearts, their consciences also bearing witness, and their thoughts sometimes accusing them and at other times even defending them.”

Our consciences sometimes convict us that, in our search for significance, we know that we “should” be far better than we are…

The old sermon illustration related to Roms 2 and Matt 7:2[6] – God places a little invisible recorder around the neck – only picks up what we tell other people about how they should live.

Then God hits the “PLAY” button…No one will be able to stand on Judgment Day.  None of us can justify our existence – even by our own standards.

Everyone on the planet is struggling for justification and nobody is getting there.

Paul says — There’s a solution (“But now”)…It is possible through the gospel to end our struggle for righteousness validation, for worth, and for acceptability.

The solution is: free justification.

2. How do we get justification?

Last week we defined righteousness is a validating performance record, which opens doors.

We tend to believe it’s the same with God – that we are to, somehow, build a validating moral performance record to make it into heaven.

Jesus comes along, and with the other NT writers, tells us about an absolutely unheard of spirituality, an unimaginable approach to God.

Where God provides us with an unblemished record—absolutely free of charge.

Not just a good record, or even a great record – but a divine righteousness – a perfect record that comes to us, alights upon us — as a gift!

When we have it it’s the end of our personal struggle for validation, for worth, or worthiness, and acceptability.

Apart from the Christian gospel there is no other religion or belief system that offers anything like this.

Free justification is important because it affects our assurance of salvation.

Last week we considered the difference between IMPARTED (or, INFUSED) righteousness and IMPUTED righteousness.

Many churches – including the Catholic Church teach IMPARTED (or, INFUSED) righteousness.

This actually can be defined as THE single issue that brought about the Protestant Reformation.  Martin Luther saw this afresh in his study of the first five chapters of the book of Romans.

A. So, what IS Imparted (or Infused) Righteousness?

The word, “impart/infuse” means to “to give.”

Imparted righteousness (falsely) declares that Christ’s righteousness is given to, or infused within – so that the believer actually becomes righteous.  (This is NOT what the Bible teaches – or what Paul experiences at the end of Roms 7.)

Paul is not writing that we are transformed into people who possess righteousness, but rather that we have been united to Christ.

And because of our union with Him (the emphasis of Romans 5), we have that which He possesses, that is, we have HIS righteousness.

False gospel:  A pastor tweeted — “Once you believe that you are righteous, you will begin do what is righteous.” (Creflo Dollar).  This pastor does NOT understand the gospel.

B. Imputed Righteousness – The word “impute” means “ascribe” or “credit.” Imputed righteousness carries the theological weight of being “counted” or “considered” or “reckoned” righteous.

Within the first 12 verses of Romans 4 (this is where Martin Luther saw this) the word, “credited” (in both the NIV and NASV Bibles) is used 7-8 times.  Roms 4:3: “Abraham believed God, and it was credited to him as righteousness.”

Paul is not writing that we are transformed into people who possess righteousness, but rather that we have been united to Christ (i.e., the 30 “in Him” passages of Paul’s letters), and are found, “in Him” — because of our union with Him (the emphasis of Romans 5), we have that which He possesses, that is, righteousness.

One the one hand free justification is far more than forgiveness and pardon – but on the other hand it is distinctly different than moral goodness.

Here’s the essence of the 2-sided coin of free justification:

Here’s my experience (and Keller speaks of this as well): People cycle in and out of churches – understanding 1) forgiveness and 2) understanding moral goodness – BUT not understanding free justification (or imputed righteousness).  This is how moralism creeps back into the church…

People understand that if they confess their sins and acknowledge that Jesus Christ died for their sins they get forgiven – “And now,” they say, “I really need to live for Him.”  This is a moralistic view of the gospel – yet this is how a lot of church-goers think.

So people end up cycling in and out of the church – come in as kids and cycle out as teenagers…then something goes wrong in their lives and they cycle back into the church.

They try hard to live like they should  – and then something goes wrong or they fall, or fail and fade away until the next time they see the need for Jesus and church.

They come back in and ask for forgiveness and they re-commit – and then they try to live a moral life – but they end up failing AGAIN!

They never get to what we’re talking about today – free justification.  They actually never become Christians.

Consider the Pharisees: They were very concerned about their sins.  They were self-justifying, moral, legalistic, miserable people.  When they sinned they were very upset, they repented, they confessed their sins – and when they’re all done they’re still Pharisees – and not Christians. (The same condition as the elder prodigal brother in Luke 15.)

Here’s what’s necessary:  We need to get our primary focus off our sin addiction and begin to boast, not in our moral performance record (or lack thereof), and boast in the finished work of Christ – which grants us free justification.

Is your justification based in performance or in trust?  This is where the elder prodigal brother was stuck.  He thought his moral performance qualified him. (Luke 15:29, …‘Look! For so many years I have been serving you and I have never neglected a command of yours.” He’s saying that he has a spotless performance record.  Is it enough?)

It’s a transfer of your moral record to what Jesus has done.

Nathan Coles 17th century Connecticut farmer – converted listening to George Whitfield – “My hearing him preach gave me a heart wound and by God’s blessing my old foundation was broken up and I saw that my righteousness could not save me.”

[1] “Just-as-if-I’d-never-sinned” is actually a very shallow and incomplete definition of justification, mostly because it only speaks to one side of the coin.

[2] It is God who awakens belief in our hearts. Col 2:13: When you were dead in your sins and in the uncircumcision of your sinful nature, God made you alive with Christ. He forgave us all our sins.

[3] A saving faith has within it an element of yielding, a repentance of trying to be lord of one’s own life and a submission to the Lordship of Jesus. (W. E. Vine, Reflections on Words of the New Testament, p. 132.)

[4] Paul often uses the word “cross” as a one-word summary for The Christ Event (i.e., the birth, ministry, death, resurrection, and ascension of Jesus).

[6] “For in the way you judge, you will be judged; and by your standard of measure, it will be measured to you.”