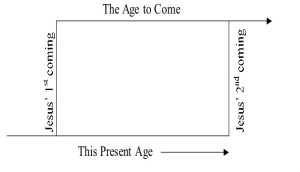 We often confuse the fruit for the goals…

“And Jesus was going about in all Galilee, teaching in their synagogues, and proclaiming the gospel of the kingdom, and healing every kind of disease and every kind of sickness among the people.” Matthew 4:23

Additionally, when we pray the Lord’s Prayer, we ask for God’s kingdom to come and for his will to be done (Matt 6:10)

Apprehending a biblical view of the present reality of the kingdom of God will enhance our faith and expectation for God to move in love and power upon those we minister to. With the coming of Jesus the Messiah, there was a gushing forth of the mercies of God. In the coming of Jesus, the kingdom of God was established with great power to confront and overcome sickness, sin, death, and the devil.

World-View
Most of us have a western, rational, highly materialistic worldview which acts as a lens through which we view our world. The worldview of most westerners does not readily acknowledge the supernatural: healing, release from demonization, spiritual giftings, etc. The result is that most westerners do not expect God to break into day-to-day situations with supernatural power. Without a growing expectation of God’s desire to move in love and power we are relegated to life on a purely natural level: reasoning with people, persuading them with arguments, comforting them when they are sick, etc. (2 Timothy 3:5 – having a form of godliness but denying its power).

Wimber used to say, “Expectation releases the power of God.”

To make a conscious decision to expand our worldview is sometimes referred to as a paradigm shift – like getting a new pair of glasses.

An approach to the New Testament
The Old Testament describes God’s dealings with Israel in the context of an ever-increasing prophetic hope that a day will come when God, as King, will personally establish a Kingdom upon the earth. This would mark the beginning of a new Age, or life. The basic framework of the two Ages begins to emerge in the Bible – this Present Age and the Age to Come. It is important to know the basic dualistic frame¬work of the Bible (this Age and the Future Age) to have an appropriate understanding of what it is saying. With a rise of the concept of God’s Kingdom ushering in a new Age, there was also the rise of an awareness of the devil and his evil deeds; the cataclysmic clash between light and darkness. The Christ-event interrupted history with a victory over Satan and his hordes.

We can now define the Kingdom of God as the dynamic rule and reign of God, the assertion of God’s authority over the evil one and his deeds. In the New Testament the dualistic framework of “this present evil age” (Gal. 1:4) and the “age to come” (Eph. 1:21) is established, but in a new way. The New Testament teaches that in the coming of Jesus Christ the Future Age has come into the present. The Kingdom of God has been fulfilled, but not yet consum¬mated; thus it is both present and future. We are living in the “already” and the “not yet.” The New Testament teaches both now and future. This is sometimes referred to as paradox (seeming contridiction).

We live in a divine tension

Our western rational (modernistic) mind-set encourages us to choose one or the other because we’re not comfortable living in tension.

Oscar Cullman in his book Christ and Time writes about WW II:

George Ladd in The Gospel of the Kingdom defines the Kingdom of God as the “rule and reign of God.” Another description, or definition would be the words and works of Jesus. There were WORDS designed to tell us how to enter the Kingdom (Matt. 5:20; 7:21), and WORKS that demonstrated the Kingdom had come (Matt. 12:28). (A heart-breaking biblical pattern: We have continually traded the presence of God for the knowledge of God.)

The parables teach the mysteries of the Kingdom of God (Matt. 13:11); his prayers taught the disciples to desire the coming (in-breaking) of the Kingdom (Matt. 6:10). The Christ-event raises us up to be instruments of the Kingdom, while his second coming promises the consummation of the Kingdom (Matt. 25:31,34). The New Testament was written from this point of view: the overlapping of the two Ages. God’s Kingdom had interrupted human history and was now spreading like leaven and growing like a seed – it is seen with the eyes of faith. This approach helps us to have an under¬standing of the prospect of supernatural activity in the New Testament, i.e. spir¬itual gifts and healing must be interpreted in the light of the Kingdom of God.

Since the presence of the Kingdom is so central to the New Testament, we must allow it to shape our world view. The Kingdom of God involves the rule and reign of God breaking into Satan’s world and releasing people from Satan’s grip. The Christ-event empowers us to become the instruments of the Kingdom of God. We are not living in a time of promise, but of fulfillment. The full reign of God and His resources are available to us today. Jesus has given us:

Our conversion to Christ marks the transition from Satan’s kingdom into the Kingdom of God; from this present Evil Age into the Age to Come.