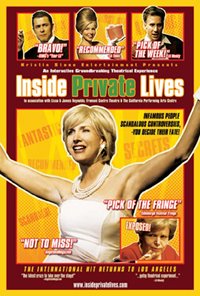 Last night Linda and I attended an excellent interactive set of one-act plays in S. Pasadena. It was a benefit performance for Wellness Works, a non-profit community resource (in Glendale, CA) that provides holistic health education and treatments for healing in an atmosphere of compassion and joy – where my mother is a board member.

One reviewer proclaimed Inside Private Lives, “Great theater, fun improv, and a history lesson rolled into one.” I wholeheartedly agree…

Inside Private Lives was performed at the Freemont Centre Theater, a 75-seat intimate theater with a comfortable courtyard to gather beforehand, at intermission, as well as afterwards to converse with the actors. The play, also performed in NYC and Edinburgh, is a look back in time to imaginary moments to engage the controversy that enveloped in real life 20th century figures. Last night’s line-up included six separate characters and scenes:

If you go, and I hope you do, look online to see which historical figures will be portrayed and then read-up on them so that you can interact constructively at the play.