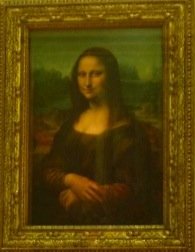 My brother recently returned from a trip to Europe, Paris, and the Louvre. He took the accompanying picture of the Mona Lisa – probably the most well-known painting in the world. I can remember being in the gallery where the Mona Lisa hangs and it seems as if her eyes followed me wherever I was standing. And did you know that it was after the French Revolution that the Mona Lisa was first moved to the Louvre? Later Napoleon had it moved to his bedroom in the Tuileries Palace — it was eventually returned to the Louvre. It would have been a bit creepy to have it in a bedroom with those eyes following people around…

So, how do we (laymen and laywomen) look at art? The following, I think, is excellent input from Justin Paton. What’s the big deal about looking at art? A little over 30% of the Bible is poetry and I think we need the artisans among us to help us interpret the Bible. Bible teachers tend to come at Scripture with a western, rational, scientific mindset, but there’s the right-brained interpretation that will help us to see fresh facets of God’s heart…

How to view ART…

Justin Paton is one of New Zealand’s foremost art writers. A former lecturer in art history and theory at Auckland’s Unitec Institute of Technology, since 1999 he has been curator of contemporary art at Dunedin Public Art Gallery.